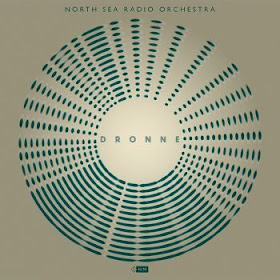 Craig Fortnam's contemporary electronica and chamber-music project has spawned just three albums since its inception in 2002, fusing cyclical classical sounds with alternative folk and jazz time-signatures, a sort of Penguin Cafe Orchestra, Soft Machine and Chris Morphitis on a slow boat to the Scottish Isles via the South Downs.

Dronne is the band's fourth long-player and possibly their most realised and consistent. Elegiac arrangements dominate the first few pieces with Vishnu Schist recalling the second half of Kate Bush's Hounds Of Love or her 50 Words for Snow and the opening Arcade turning into a sweeping widescreen overture for the setting sun.

The closest we come to a determinable song is the motorik The British Road which is driven by a slight syn-drum, sweet harmonies and a feast of strings. I can imagine this translating very well in a concert setting such is its gradually unravelling bent. There's also a radio edit included, suggesting NSRO are as keen on it being a single as I am. Given that it's an exquisite Robert Wyatt cover (Fortnam's got previous with Wyatt - he performed his work at a French arts festival in 2014), that's no shock at all.

There's also some acoustic guitar wizardry, light and airy folkisms, Krautrock leanings (particularly on the glistening and hypnotic title-track) and eccentric psychedelia (very Cardiacs in places) on Dinosaurus Rex, proving that once again, North Sea Radio Orchestra have enough idiosyncrasies in their locker to satiate most fans.