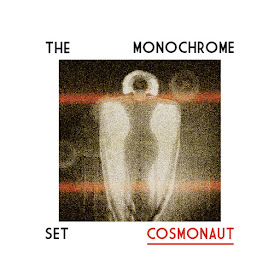 There's something so reassuring about a new Monochrome Set album, you wish they'd release one every week as an antidote to the frankly shite world we keep hearing about, day in day out. Cosmonaut follows last year's knockabout Spaces Everywhere (an 8/10 on this very site, no less) with some intent, coming as it does less than 18 months after its predecessor. Who'd have thought that Bid and the boys could improve upon their first album for Tapete?

But surpass they have and in some style. Arch wit and hummable tunes are all too rare these days but The Monochrome Set's colourful oeuvre continues to dazzle with frontman Bid's tangental lyrics and the band's pretty awesome musicianship. I'll say it here and now - bar the lilting Tigress, Cosmonaut is maximum toe-tappers and jaunty spring-in-the-step casual abandon all the way.

The slinky shuffle-beat on Put It On The Altar borders on (whisper it) 'funky', the fabulous carefree title-track greets us with carefree attitude rather like early classic Jet Set Junta and, come on, who hasn't stood up in a crowded sweaty train carriage and hollered Stick Your Hand Up If You're Louche? Any one of this trio should be gracing the nation's airwaves sometime soon (but probably won't) although if Tapete don't issue a 7" of Louche with a supporting video and live dates, there's no justice in this cruel world.

Each song appears to tell a third-party story, a bizarre one in a few cases - hello Squirrel in a Hat, hi Monkey Suitcase - so much so that an Ealing kitchen-sink drama-comedy surely beckons. Although there are a few musical references to their Cherry Red days, The Monochrome Set seem incapable of putting a foot wrong and just keep improving with age. Next album around Christmas 2017 fellas?